Welcome to Last Chance - a Review

She's learned you can't count on anyone--but she didn't count on landing in Last Chance.
The red warning light on her car dashboard may have driven Lainie Davis to seek help in the tiny town of Last Chance, New Mexico, but as she meets the people who make this one-horse town their home, it's her heart that is flashing bright red warning lights. These people are entirely too nice, too accommodating, and too interested in her personal life--especially since she's on the run and hoping to slip away unnoticed.

Yet in spite of herself, Lainie is increasingly drawn into the small-town dramas and to a handsome local guy with a secret of his own. Could Lainie actually make a life in this little town? Or will the past catch up to her even here in the middle of nowhere? 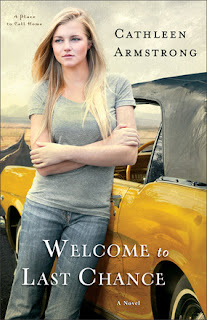 My review: By far my favorite thing about Welcome to Last Chance is the warm, homey, community feel. Although there is never a lack of small-town drama, these friendly people do try to take seriously the command to love your neighbor as yourself. Especially Elizabeth, the sweet old grandma who takes Lainie in and tries to show her Christian love. Lainie herself is a puzzle: hardened, and a little calculating, but it was a joy to see her sweeten and soften over the course of the story. The hero, Ray, is a bit of an enigma himself. Just imagine a bar owner who doesn't drink, an artist who doesn't show people his paintings anymore, and a Christian who doesn't go to church, and you might have an idea. Reading Christian fiction I usually prefer the hero to the heroine (strange, I know...) but in this story, I loved Lanie far more than Ray.

Welcome to Last Chance was enjoyable, not exceptional in its genre, but a pleasant afternoon read.

Rules of Murder by Julianna Deering

Any self-respecting literary purist would have shuddered in horror when the book she was hoping to read began to look like a Dorothy Sayers rip-off. Not me. I said to myself, "How delightful!" and decided I was in for a good time.

And I was right.  About the good time I'd have reading it, that is. But Rules of Murder is by no means just a Dorothy Sayers rip-off.  There was a  taste of Dorothy Sayers' influence in the matter of characters and style, it is true; as well as a bit of Agatha Christie flavor in the setting; and the tiniest bit of P. G. Wodehouse fun around the start of the story.  However, that only added to the charm of this delightful and clever book. Julianna Deering is an accomplished mystery writer in her own right. 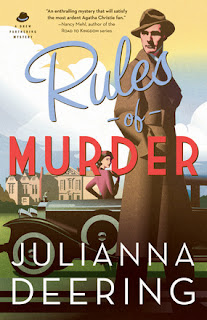 Drew Farthering is 1930s landowner with not a thought in the world farther than enjoying life as a stylish gentleman and falling in love with a beautiful American, Madeline Parker. But when a dead body is found in his own gazebo, he decides to solve the crime, armed with the skills he's gained as an avid mystery reader and a complete knowledge of the rules of what cannot happen in a murder mystery.  But what will happen as murders pile up and the murderer seems set on ignoring all the rules?

What can I say? Rules of Murder combines the Golden Age Mystery feel with a Christian fiction flavor, perfect for old mystery buffs who want to read something newer or romance lovers who want to get into mystery. I'm happy to say there were a couple twists and turns in the plot that surprised me and I didn't guess the murderer 'till the very end (quite an accomplishment on the author's part.)

A few months ago, when I was thinking of writing a mystery myself, I looked up Father Knox's Rules of Detective Fiction and was very disappointed when my oh-so-lovely plot broke one of the rules. But I'm delighted to see Julianna Deering intentionally break almost all of his rules and still end up with a clever story.  As a matter of fact, I'm a little miffed I didn't get to the idea first.