Irenaeus, an early church father, once famously wrote, "The glory of God is a human being made fully alive." Let me reshape that thought a bit, and re-state it as the question that incited me to write this book:

What does it mean to be fully alive as a male or female for the glory of God? 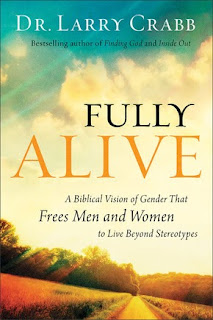 Dr. Crabb says that being fully alive has to do with relating to others, showing something about God by how you relate as a man or a woman. He uses his background as a Christian, psychologist, counselor, and husband, to write a scripturally-dependent, psychology-flavored study of gender uniqueness.
The first section of this thought-provoking book touches on what discovering masculinity and femininity. The rest of the book focuses on identifying core terrors that prevent us from relating as men and women, identifying relational sin, and becoming fully alive as men and women, especially in our relationships.
Maybe it's because it's a big book with small print. Maybe it's because Dr. Crabb talks like a psychologist and I sometimes couldn't quite get what he was saying. But however it is, I have mixed feelings about Fully Alive. I did appreciate his study of the biblical roots of masculinity and femininity, as well as his insights into the core terrors of men and women, and especially the very helpful two chapters on submission. I'm not sure about the rest. Being fully alive is all and only all about relating to others as a man or a woman? Dr. Crabb has good points, but sometimes it seems like all he thinks matters about the Christian life is relating to other people as a fully alive man or woman. And it irked me when he subtly put down traditional Christian views on manhood and womanhood. Not because his book disagrees with them (it doesn't) but because he wants to promote his view as better, more liberating or something. Even though it all comes down to the same stuff. And never, ever, bad-mouth your parents in the prologue of your book. It just isn't done. Please.
So what do I think of Fully Alive? It's a thought-provoking book with some very insightful sections and some not-quite-so-comprehensible ones. It has very helpful thoughts on how to relate as men and women, and, while it isn't technically a marriage manual, I think it would be most helpful for married couples who want to go deeper in understanding and relating to each other. It's not as easy a read as many other books of its kind, but it can be worth it.
Disclosure: Book has been provided courtesy of Baker Publishing Group and Graf-Martin Communications, Inc.
Available at your favourite bookseller from BakerBooks, a division of Baker Publishing Group.﻿
written by Maria at 6:06 PM No comments:

Kate knows the truth is out there--but if she's right, that means a killer is out there too. 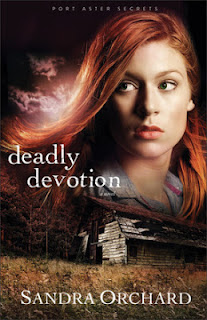 Research scientists Kate Adams and Daisy Leacock were on the brink of a breakthrough for treating depression with herbal medicine when Daisy was suddenly found dead. Kate knows that her mentor's death wasn't suicide or a careless accident--and she's determined to do whatever it takes to unearth the truth about what happened to the woman who changed her life.

Former FBI agent Tom Parker is finding it hard to adjust to life back in his hometown of Port Aster. Though an old buddy gave him a job as a detective on the local police force, not everyone approves. Tom's just trying to keep a low profile, so when Kate Adams demands he reopen the investigation into her friend's death, he knows his job is at stake. But despite his attraction to her, Tom thinks Kate may have something to hide.

As evidence mounts, a web of intrigue is woven around the sleepy town of Port Aster. Can Kate uncover the truth? Or will Tom stand in her way?

What I loved: I don't normally read this kind of story. Actually, I never read this kind of story, but I enjoyed it. The mystery elements kept the story from focusing only on the romance and the romance elements kept the story from having nothing but investigations.  Kate and Tom are two likable protagonists and it's easy to hope they get over their difficulties and find a happy ending together.
I also enjoyed the mention of all the herbal remedies and teas Kate's interested in. It was fascinating and gave the story a nice little touch of authenticity. And of course Tom's kind, former police chief Dad found a special place in my heart too. deadly devotion isn't exceptional for either a romance or a mystery, but it was riveting enough to keep me glued to its pages for most of the day and I know I'll be looking for other books by the author.

What I didn't like so much: I was a little disappointed in how their investigations went. It was like all their clues were leading them to nothing but dead ends until the murderer suddenly incriminated him/herself.  Of course who it is should come as a surprise to the readers, but not necessarily to the detectives, especially when one of them is a former FBI agent and supposed to know his stuff. I grant that I didn't have a clue of who the murderer was either, but I would have appreciated a few more related clues and a clearer motive to help me along. And then the murderer never actually got convicted for his/her crime. *groan*

I know that that kind of writing just screams, "Read the next book!" But since I did enjoy the story and I want to know what happens next, I think I will.

Stealing the Preacher - a review

On his way to interview for a position at a church in the Piney Woods of Texas, Crockett Archer can't believe it when he's forced off the train by an outlaw and presented to the man's daughter as the preacher she requested for her birthday. He's determined to escape--which would be much easier if he could stop thinking about Joanna Robbins and her unexpected request.

For months, Joanna had prayed for a minister. A man to breathe life back into the abandoned church at the heart of her community. A man to assist her in fulfilling a promise to her dying mother. But just when it seems her prayers have been answered, it turns out the parson is there against his will and has dreams of his own calling him elsewhere. Is there any way she can convince Crockett he ended up right where he was supposed to be? 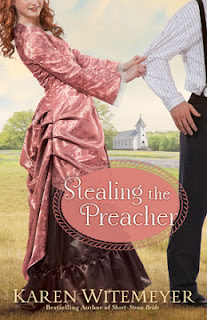 My Review: Okay, I know the cover looks cheesy, but from the unlikely premise Karen Witemeyer has crafted an enjoyable story of faith and hope.

Joanna is a capable and compassionate girl who wants nothing more than a preacher to help her share her faith with her ex-outlaw father.  Crocket is a faith-filled cowboy turned preacher who isn't afraid of hard work.  The two are first attracted by each other's faith and then by something more...  But first from Crockett's desire to go and later from Joanna's own insecurities, her stubborn father and a flirtacious girl more than a little interested in Crockett, many things are happening to keep them apart.

Can I tell you how much I enjoyed how Crockett and Joanna are first attracted to each other!  Frankly, I'm tired of romance books where the characters are only interested in each other because they're drop-dead gorgeous. What kind of shallow base for a marriage is that?  But a story where they first become close because of their shared faith, and later because of a strong friendship (and don't worry, there still is some of the physical attraction stuff in Stealing the Preacher if you like that kind of thing; it just isn't my personal favorite) makes me very, very, happy.

This is the first of Karen Witemeyer's books I've read, and it made me very eager to read the prequel, Short-Straw Bride, and whatever sequels Mrs. Witemeyer may write. This book has definitely made me a fan of hers!

P.S. If you want to see a sweet little book trailer, here it is!