Sometimes it is hard to tell if you are the cat or the mouse.
Lady Céline Wexham seems the model British subject. French by birth but enjoying life in 1813 as a widowed English countess, she is in the unique position of being able to help those in need-or to spy for the notorious Napoleon Bonaparte.
When Rees Phillips of the British Foreign Office is sent to pose as the countess’s butler and discover where her true loyalties lie, he is confident he will uncover the truth. But the longer he is in her fashionable townhouse in London’s West End, the more his staunch loyalty to the Crown begins to waver as he falls under Lady Wexham’s spell.
Will he find the proof he needs? And if she is a spy after all, what then will he do?

The perfect historical romance... spying, secret attraction, intrigue, secret kisses...  All the same, I wasn't quite sure what to think of Moonlight Masquerade.  On the one hand, it is exquisitely done, brimming with attraction and intrigue, a book that I would have been proud to have written; on the other hand, Mrs. Axtell goes a little farther romance-wise than I would have done (clandestine kisses make everything soooo awkward afterwards... Just have a little self-control, will you?), the middle is melodramatic and the ending is unnecessarily drawn out.
All that to say that you shouldn't expect a perfect book.  But if you want a very well-written Regency Romance, what are you waiting for?  Other than the fact that the cover is gorgeous; (always choose a book by its cover!) the setting is lush and vivid and the interaction between upright, gentlemanly Rees and beautiful, clever Celine makes for a hard-to-put-down story.  This is the first of Mrs. Axtell's books I've read and I'll be definitely looking for more.
My rating: 8.5 out of 10.
Book has been provided courtesy of Baker Publishing Group and Graf-Martin Communications, Inc.
Available at your favourite bookseller from Revell, a division of Baker Publishing Group
written by Maria at 10:17 AM No comments:

The Icecutter's Daughter - a review 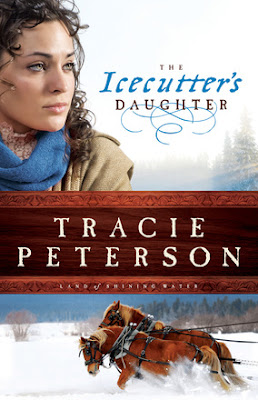 As the lone female in a houseful of men, Merrill Krause dedicates her life to caring for her family and their business, as her dying mother asked. Besides, it suits her; she's never felt like she fits what most people expect in a girl--she'd rather work with her father’s horses and assist with the ice harvest. And though she’s been mostly content up to this point, a part of her wonders if there will ever be anyone who will notice her amid the bevy of brothers determined to protect her from any possible suitors.
When Rurik Jorgenson arrives in their small Minnesota town to join his uncle's carpentry business, he soon crosses paths with Merrill. But unlike other men, who are often frightened away by her older brothers, Rurik isn't intimidated by them or by Merrill's strength and lack of femininity. The attraction between them begins to build...until Rurik's former fiancee shows up with wild claims that bring serious consequences to Rurik.
Can Rurik and Merrill learn to trust God--and each other--when scandal threatens their newfound love?

I'm surprised how much I enjoyed The Icecutter's Daughter.  I consider myself notorious for disliking the heroines in romance novels (They all seem so fake. I think Miss Austen's superb characterization may have spoiled me slightly. :P)  However,  her name is only one of the unique things about Merrill.  She's strong and capable - and very talented. I must confess I enjoyed the bits about her amazing cooking and painting a great deal.  But still, she's a real woman.  Not a corset-burner by any means; she likes to be pretty but doesn't often get the chance, and she's kind and helpful, but very able to stick up for herself.  So yes, very well-done. :)

Rurik was nice too.  Not as unique as Merrill, but solid and easy to like.  I had mixed feelings for Svea, his former fiancee, but that's only to be expected. (By the way, there are some things about a pregnancy out of wedlock, but Mrs. Peterson deals with it tastefully, without any more elaboration than necessary.)  I really enjoyed the inclusion of Merrill's brothers, though. (Why are most romances so sadly lacking in older brothers?  Maybe the authors think they'll spoil the fun.)  With one of my own, I rather have a thing for older brothers and I'm glad they were in there.  On top of that, Merrill's only friend her own age has a thing for one of the brothers, which makes it sort of amusing.

And the ending...  It was sort of strange and later, sort of cute. Call me a hopeless romantic, but there it is. :)

For a Christian romance story, The Icecutter's Daughter is clean, enjoyable, and very well done.  My rating: 8 out of 10.

Back to from a tour of Europe to find that her family's candy business is rapidly failing, Lucy Kendall wishes she could ignore her coming out in society and her position as St. Louis' Queen of Love and Beauty.  Instead, she puts her energies to creating a new candy that will reverse their fortunes and surpass the recipe their rival swindled them out of.  What she doesn't know is that her mother is planning to marry her off as soon as possible - and that a very possible possibility is the hopelessly dull Mr. Alfred Arthur.

I decided to read Unrivaled because the idea of two rival candymakers falling in love just sounded so cute.  Actually, the little candy shops in my mind turned out to be huge factories and the small-town life ended up being the top of high society, with Lucy herself being the Queen of Love and Beauty (and they did really pick one of those every year in St. Louis!)

The chapters alternate between Lucy's point of view and Charlie's.  I must admit, I much prefered Charlie.  Lucy got on my nerves a little; I couldn't relate to her and she didn't seem quite real, but Charlie did.  With his father leaving his family desperately poor, he spent most of his life trying to support them, and then he's suddenly sent off to reunite with his now-fabulously-wealthy dad.  Small wonder he doesn't care for him at first (I didn't either; Charlie's dad seems like a heartless oaf without moral principles,) but I found Charlie's efforts to forgive and his friendliness very endearing.  Not as endearing from Lucy's point of view, of course, but considering they hated each other most of the time, that's not surprising.  The side characters are loveable too.  Lucy's sick father is a dear, and so is the maid that has a sweet little part in the story.

However, I'd have to say that Unrivaled has a quite few of my personal Christian fiction pet peeves (for example, the 'modern' heroine, the matchmaking mother, the kissing between people who think they hate each other, etc.)  But inspite of this, it was a very enjoyable read!  I guess it takes real talent to make me enjoy my pet peeves! :D

So what would I say?  Though it's not great literature, Siri Mitchell's Unrivaled is a very fun book and if you'd like a story about candymakers and high society romance in the early 1900s, you should have a look at it!

And (obviously) my opinions are completely my own and I was not compensated for my review.  Other than the fact that I got a book. I like books. :)
written by Maria at 3:18 PM 2 comments:

The Land of Calais - a Review

Since I first met The Scarlet Pimpernel a year and a half ago, I've loved reading Baroness Orczy's original books.  Although I soon found many others who loved it just as much as I did, I never found a single bit of good published TSP fanfiction.

Needless to say, I was delighted when I stumbled upon Literary Maidens Publishing and saw that Melody Grubb had published a TSP fanfiction story, The Land of Calais.

Nothing but a promise from the legendary Scarlet Pimpernel himself would have induced Jeanne Andole to leave France before her family was brought to safety.  With that promise, she moves to England and joins high society, beginning a friendship with Lady Blakeney.  Yet time goes by and her family does not appear.  She begins to wonder who the Scarlet Pimpernel actually is and why he has not rescued her family.  In the middle of this perplexity Jeanne meets Chauvelin and that can only lead to trouble.  Before long Jeanne is back in France, trying to rescue her endangered family since it seems the Scarlet Pimpernel will not.  Unfortunately, Chauvelin, back to his old revolution-supporting activities, is eager to use the situation for his own advantage.  Soon Jeanne’s whole family is under arrest – and it seems there is nothing the Scarlet Pimpernel can do to help them.

This is a lovely little book.  Jeanne, with her strong faith and a tendency to jump into situations, is  easy to relate to.  Sir Percy is as laughing and self-deprecating as ever, with thankfully less of those minced oaths that I've always considered the worst of the TSP books.  Chauvelin is as evil as ever.  Marguerite  has just enough of a comeo to keep me happy, as does Lord Anthony Dewhurst.  I liked how this book was written too, with delightful echoes of  Baroness Orczy's books mingled in with Melody's own writing style.

At 71 pages, I suppose The Land of Calais could be more accurately called a novella.  A few times (especially when there were Certain Happenings near the end) I found myself thinking that the story would have been better if it was drawn out a little more, but hey, don't we all want nice books to be longer?

In conclusion, this sweet little book is not only a trip back to  the world and characters of the TSP stories, but also an exciting tale in its own right.  If you've ever been wishing there was more TSP fanfiction, you should definately look into The Land of Calais!

Disclaimer:  Many thanks to Melody Grubb of Literary Maidens Publishing for giving me a review copy!  All opinions are my own.
written by Maria at 12:12 PM 1 comment: