My brother came in with the mail and handed me something, "There's a package here for you." I took one look at it and bolted upstairs, closing my door firmly behind me so that my sister couldn't peek in (one of the copies was her Christmas present, you see.)   I pulled the package open but kept myself from ripping the pages open and starting to read like I so desperately wanted to.  Instead, I carefully unwrapped the beautiful wrapping paper and allowed myself a couple inward squeals.  The front cover is gorgeous when you see a picture of it, but to see the front and back for myself, to hold it in my hands, was more than I had imagined.  I opened it and squealed some more when I saw the acknowledgments.  Then I began to read. 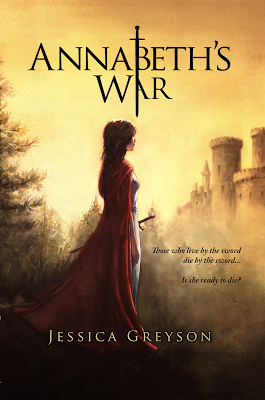 Annabeth, the swordmaster's daughter, had been trained by her father as the son he had wished he had.  Now Lord Raburn has seized power and she is left, the only one in the kingdom, with secrets which just might preserve the lives of her father and her prince.

If she can stay alive.

What can I say?  Opening the pages was going back into the medieval stories I've loved and used to almost live in.  I don't know where to begin.  Annabeth.  Let's start with the girl who has center stage.

Coming to Annabeth's War, I unconsciously expected a bit of a feministic outlook.  I mean, have you ever found a book about a sword-wielding medieval girl  that wasn't feministic?  Well, meet Annabeth.  Jessica's deft portrayal blew me away.  Here is a girl, strong, but still tender, sweet, complex, miles away from the cliche rebellious girls with swords.  I was VERY impressed.  And then there's Ransom the bounty hunter, charged to earn Annabeth's trust and bring her to safety.  Can I just say that I love him?  Because I do.  His character is like Annabeth's; it unfolds slowly, beautifully, just enough to tantalize you and make you read on.  And the exchanges between him and Annabeth are delightful and incredibly sweet.

So I LOVE Ransom and Annabeth, but under them, my real favorite was a captain of the guard named Eliot.  He came onto the scene sadly late in the story (sadly for me who wanted more of him, fortunately for Annabeth - but I musn't give you spoilers) and it didn't take long before I was convinced that he was looked, acted, and sounded like Richard Armitage.  Awesomeness, peoples.  And did I mention that these characters come alive?  They do.

And then there's the rest of them: Lord Raburn ("villain" is written all over him!), Prince Alfred (another great guy) Song  Lark, Christina, and Annabeth's father (though his page-time was sadly short. *sniff*)  And what these characters do is not to be described.  Joy, pathos, humor, romance, villainy, swords...

But if I had to find one word to summarize Annabeth's War I would chose 'beautiful.'  Partly because Jessica's writing always has that indefinable quality to it, and partly because beauty is woven all through the story.  The beauty God gives to every single story; how he makes everything beautiful in its time; that's what Annabeth's War is about.

But why am I telling you all this?  You want to read it for yourself, of course.
written by Maria at 8:52 PM

I've wanted to read this ever since I first heard about it a few weeks ago, but then you said "....looked, acted, and sounded like Richard Armitage." and now I really want to read it! Ahem, and of course the story sounds brilliant.

miss georgiana this sounds like one epic book! thanks for the rec & hope it becomes a fav of yours

I loved this book!!! I liked Eliot too, but I actually preferred Alfred to him.