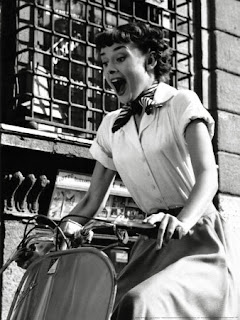 {Writing}
Nothing at the moment, but I am all ready for NaNoWriMo tomorrow.  I've decided to go with a topic a bit lighter than all my previous novels, so this year's book is a fun, terribly improbable, sequel called After the Holiday.  When I first heard about the vintage movie Roman Holiday from darling Rachel I had no idea that it would end the way it does.  But since it does, what better thing to do than write a sequel?  (If you want to see more about my story, go to my NaNoWriMo page or my writing blog.)

Source: threenailsphotography.com via Anna on Pinterest
With a heavy literature program this year, instead of a lot of free reading, I'm plugging away at The Iliad (surprisingly interesting) and recently finished Death on the Nile.  I also just started listening to My Man, Jeeves on audiobook which I'm hoping will lend a little more lightness to my writing style.  I do know that after my usual diet of Dickens audiobooks my writing gets to be a little... ponderous.
I'm also in the middle of a book of C.S. Lewis essays (astonishingly good) that I read on Sundays when I have more free time than usual.


{Listening}
Right now I'm actually listening to Tchaikovsky's 1812 Overture, because my brother wanted me to turn some music on and that's all I could find.  But I've been compiling a playlist for After the Holiday with whatever music I could find that bore some similarity to the characters, feel, or plot.  And it's actually quite conducive to inspiration.  I go through my list, "Could this song go in?" "No, it has nothing to do with Roman Holiday."  "But what if I put something like it in the sequel?"  And on comes a splendid idea.


{(Re)watching}
The Scarlet Pimpernel (1934.)  It does get better every time.  Leslie Howard, while not up to the level of the brilliantly and heroically foppish portrayal of Anthony Andrews, is so funny it's... funny.  Merle Oberon does an admirable portrayal of Marguerite, she is a bit of a childish wimp here.  The dresses are swoon-worthy - and Percy's cravats are gag-worthy.  And there's Sir Andrew (who looks to be the one person who knows how a cravat SHOULD be worn) and Chauvelin, who is ugly.  And while it's pretty close to the book, they added a lot of the memorable quotes and touches that we love in TSP1982.  And there are no skip-worthy scenes in it.  Now if only it wasn't in black and white and Percy's cravats were at least tolerable...

{Learning}
That God is really so amazing.  I'm praying for something important, barely realizing what I actually want, He brings it in a way I would have never expected or imagined and so soon that I'm left wondering "Did this really happen?  Here?  To me?"

Other more, boring things I'm learning is that chemistry is complicated and that Achilles was a contemporary of the prophet Samuel.

{Looking}
At the computer screen. :P

{Feeling}
A little tired.  A great deal like I have a cold, which is not surprising.  Also a little disappointed that we didn't have more of Hurricane Sandy.  I have a penchant for storms as long as they don't wreck anything, but all we got was a bit of disappointing wind Monday night.  I know, though, that a lot of you on the east coast got a great deal more storm and damage than you probably want.


﻿
Source: redkiteslongnights.tumblr.com via Alexandra on Pinterest
{Anticipating}
The start of NaNoWriMo tomorrow... ONE DAY MORE!  And a writing workshop I'm also attending tomorrow and a Pride and Prejudice study group on Friday (LOTS of fun.  This thing has definitely re-awakened my love for P&P.) And a friend's surprise sleepover party from Friday to Saturday.  She thinks she's planning her own birthday party for later and that mine is going to be this Friday.  She won't know what's happened. :D


{Wishing}
...you were somehow here again... wishing you were somehow near...
Never mind.  I sing too much.
1: That I had more time.  2: That I could sing properly when I have a cold.  3: That I could find some good 50s style songs to put on my After the Holiday playlist.  Any suggestions?


{Loving}
When I catch a glimpse of a visitor from the other side of the church and decide (rather illogically) that a girl who does her hair like that has to be nice.  After the service I go over, start a conversation, and soon realize that nice is an understatement.  Then we get to talking about books.  "So what are your favorite authors?"  I vainly grope around for a few names I can through out.  "Do you like writers like Jane Austen and J.R.R. Tolkein?"
Yes.  As a matter of fact, I do.  Couldn't have said it better myself.

Source: google.com via Michaela on Pinterest
Coffee.  It was Michaela who convinced me to give coffee another change and I'm glad she did.  I still can't abide it black, but the flavor, in whatever kind of cappuccino, cookies, baking, big mugs with lots of sugar... love.  :)
(and i made chocolate dipped espresso shortbread cookies this afternoon.  doesn't that sound good?)

Daily Feats.  In other words, the website where you'll get gift cards for free.  If any of my aspiring author friends publish books anytime soon, their books will be bought with an Amazon gift card that I earned by saying that I make my bed, have a complete breakfast, and read daily. :D