Review: It's (Not That) Complicated 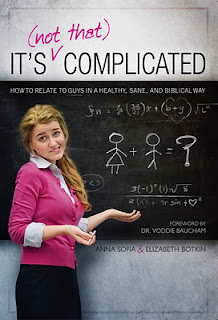 The subtitle of Anna Sofia and Elizabeth Botkin's newest book is: How to relate to guys in a healthy, sane, and biblical way.

Since when have girls been able to relate to guys in a way that's healthy, sane, AND biblical?  Healthy?  Whether we flirt with guys or ignore them, most of our relations with them wouldn't exactly be qualified as healthy.  Sane?  The word 'boy-crazy' is there for a reason.  Biblical?  Everyone seems to disagree about what the Bible says about guy/girl interaction.  Does it even say anything about it?

Well, yes.  Using principles solidly rooted in the Bible, as well as common sense and candid comment from various young men, the Botkin sisters demonstrate that relating to guys can be done in a healthy, sane, and biblical way.  And then it's really not that complicated.

This isn't a blanket endorsement of everything Anna Sofia and Elizabeth Botkin say or write.  Partly because... this is all I've read by them.  But It's (Not That) Complicated is the best book on guy/girl relationships I've seen.  The reason is that Anna Sofia and Elizabeth are so Scripture-focused.  One place where this particularly jumped out at me is the part where they talk about crushes.  Instead of adopting one of the two conflicting viewpoints, either the if-I-like-a-guy-then-I've-lost-my-emotional-purity,-given-away-part-of-my-heart-and-won't-have-any-left-for-my-future-husband position or the crushes-are-natural-and-not-a-problem-so-you-can-like-any-guy-as-much-as-you-want idea.  They say:


We ask the wrong question when we ask, "Is having a crush a sin?"  The Bible doesn't actually say and the reason is because emotional purity is a made-up moral category.  And it's giving a lot of us feelings of (unbiblical) guilt for committing some dreadful nebulous crime that there is no definition for, when the answer would actually be very clear if we phrased the question using biblical terms.  There are plenty of real moral categories for real sins - like lust, covetousness, idolatry, fear of man, vain imaginations, and presumptuous sins.  How much clearer would things be if we would just go ahead and say, "I've made an idol out of a young man; is that wrong?" or, "I'm having lustful thoughts for this guy - is that a sin?

The Bible gives plenty of clear commands, both positive and negative: Guard your heart.  Love the brethren from a pure heart.  Think on what is pure and what is true.  Don't covet.  Don't lust.  Have self-control.  Take every thought captive.  Going against any of these clear commands is a sin.  This should answer our questions.

See?  Now it's not that complicated again.

You see what I mean?

Before I can go more into what this book says, I'll have to tell you what it doesn't say:  It doesn't say how to get married.  Anna Sofia and Elizabeth sensibly point out that since they're not married themselves, they aren't qualified to write about that.  But with five brothers and many guy friends, they are qualified to write about general guy/girl relationships.  This is very handy for us single girls who probably won't get married in the near future.  Sure, I Kissed Dating Goodbye might have good advice for when you are getting into a serious relationship, but it doesn't really apply to our lives now.  It's (Not That) Complicated does.

Anna Sofia and Elizabeth discuss such important topics as
On top of this, they offer practical tips on interaction and conversation, relevant comments from real young men, appendices to parents written by their parents, and the comforting conviction that when you look at it through the Biblical lens, it's really not all that complicated.  Although this is a book on guy/girl relationships, the Botkin sisters make it quite clear that it isn't all about guys.  It isn't all about marriage, either.  It's about serving God, and that includes how we relate to the guys around us.

So what do I say about this book?  I say that it's the best book on relating to guys I've ever read.  If you only ever get one book about guy/girl relationships, get this one.

P.S. In all my praise of this book, I might have forgotten to say one important thing: that it's actually a lot of fun to read.  On top of the interesting quotes from a wide range of people in a wide range of circumstances they include, the Botkin sisters' delightful sense of humor pops up regularly and I had a lot of fun following and laughing at their direct or indirect references to common books, phrases, poems, or people.  Hey!  They just quoted Rudyard Kipling!  And paraphrased Elizabeth Barret Browning!  And took a couple lines from some of my favorite musicals!  And talked about Mr. Darcy!... again. :P

Now that I've basically told you to buy this book immediately, it's only fair to tell you where you can get it. It's available from Western Conservatory, from Vision Forum, and from Amazon. ( And no, I'm not getting paid to tell you this.)
written by Maria at 5:47 PM

I have this one to read but haven't gotten to it just yet! Like everything these ladies put out, it sounds good. :-)

I ADORE this book and totally recommend it! As a girl with no brothers, I love the practical ideas these ladies give in their book! So worth your money. Or just borrow it from a friend, like I did. ;)
-Lily

I haven't read the book all the way through, but I *have* heard it's a really good dose of common sense! And you're right--guy/girl relationships don't have to be that complicated. I learned that during a month away, being the only girl {basically} with a dozen guys. :) We had such a wonderful, simple, lovely time together!

Beautiful review...I've been curious about this book. I'll have to see if I can pick it up sometime soon!

And I'm a strong supporter of the fact that girls and guys can be just friends, by the way.... : D

I awarded you, and I posted on In the Library. :/ I apologize for neglecting it.

Hello Maria Elisabeth! Just wanted to let you know that I tagged you. :)

I love this book. It made my top ten for the year, as did their book So Much More. In fact, their book So Much More was the most illuminating book of my year. And their website is good too, VisionaryDaughters.com. I haven't seen anything unsound in their writing. They are Biblically faithful, articulate, and passionate about the LORD. I admire them a lot!

This book is beyond excellent!It truly got me thinking on subjects such as these. I totally recommend it to all young ladies. Young men are brothers in Christ and ought to be treated as such. I can't wait to read some of their other books!
Carissa