Interview with Only a Novel Author Amy Dashwood 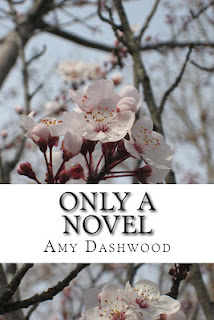 Hello, m'dears!  I'm so delighted to have the splendiferously talented amazing writer Amy here to talk about her delightfully wonderful recently-published book, Only a Novel.
(And if you were looking a little strangely at all of the adjectives in the last sentence, when I haven't even read Amy's book, I will just say that I have, but I am trying to save all the squeeing until my review, which should be posted in a few days.)

So, to tantalize all of you who haven't read the book yet, and to make me wish that Mamma doesn't have my copy right now so that I can reread it immediately, here are my questions and her answers!

Summarize the plot in 30 words or less (just because I want to challenge you. :D)
Okayyyyy… here goes. :D Elizabeth, left penniless and alone in the world, travels to England to become a governess. She is befriended by several unusual people and learns that life and books are different.
Thirty words exactly. And I now know that if all else fails, I can always fall back on a career in writing incredibly trite and cheesy back cover blurbs for novels. :P

I love the flowers on the cover!  Is there a particular reason you chose them?
There was indeed! That was one of the free cover images provided by CreateSpace.  Heehee.  I had originally wanted to use a photo of a rose that I’d taken myself, but the picture wasn’t of high enough quality for the cover creator, so I ended up using one of the free images.  There weren’t many pictures that seemed to fit with the general feel of my novel, but when I saw the one of the cherry blossoms, I knew I’d found it.  (Oh, and I eventually used the rose picture for my giveaway button.  :D)

When, where, and how did you first get the inspiration for Only a Novel?
My first degree of inspiration, so to speak, came in the form of reading far too many Sherlock Holmes mysteries when I was fifteen.  (Yes, I’ve read all four novels as well as each and every one of the short stories.  Any fellow obsessive fans out there?)  My writing tends to be influenced by what Iread (do tell!) and I started to get wisps of ideas about an American young woman who went out to work as a governess for a family on a cold and lonely English moor.  No, there was no Hound of the Baskervilles, but there could very well have been.  :D  That story never really went anywhere, but then when I started contemplating NaNoWriMo in November 2011, I dug out the idea and revamped it with the title “What Would Elizabeth Bennet Do”? This time around, the story focused on a rather different heroine with adeep-set love for Jane Austen’s books.  Eventually the title got re-worked, of course, but Jane Austen (and Elizabeth Bennet) remained a constant source of inspiration.

Which scene was the most fun to write?
That’s a hard question because most of them were fun to write.  J  I really enjoyed writing the ball scene in chapter four, though, before I started getting frustrated by plot holes.  In that segment, Elizabeth accompanies Lavinia to a lavish party hosted by Lady Judith Meriwether Fagles (an old busybody with a self-described talent for matchmaking) and is roped into dancing with a—quote—most eligible young bachelor lieutenant—end quote.  He’s positively dreadful, but I had great fun writing about Elizabeth’s discomfort during that event.  I’m afraid I got rather too much fun writing about poor Elizabeth being embarrassed. I was a bit mean to her, I’m afraid.

Did you have to do much rewriting and editing or did you think it was perfect as it was?
Oh, I didn’t do a single snip of rewriting or editing—every word that flowed from my golden  was perfectly perfect in everyway.
Ha.  Ha, ha, ha, ha, ha.
In reality, I had to do a ton of rewriting and editing—but I did it (rather unconventionally) as I went along.  I know, I know, that’s a blatant disregard for NaNoWriMo rules, but the perfectionist in me insists on editing at least a little bit as I go along.  Then when I was all finished, I rewrote quite a bit of it again.

I know Only a Novel began as a Nanowrimo project.  Did you know the general ending and many of the characters at the start or did you prefer making them up as you went along?
I made almost all of it up as I went along.  I’m what’s called a seat-of-the-pants writer, which basically means that I have an idea and a premise for a story when I begin, and the rest of it (hopefully) manifests itself to me as I write.  When I first started Only a Novel, I had no idea how it was going to end.  Well, all right, I knew I wanted a happy ending, but that was about it.

And (I know this is an irrational and irrelevant question, but) what font is it printed in?  Did you have any trouble choosing it, or didn't you really think about it?
I set the main text as 11-pt. Garamond (because that was the default font for the template I used, heehee), but when Iuploaded the document to CreateSpace, they changed it slightly to something“more compatible with the trim size I’d chosen.”  It looks just like Garamond to me, though.  :D

What five words best describe Only a Novel as you see it?
Books, friendships, prejudice, learning, nonsense.

Thank you so much for hosting me, Maria! This was great fun!

Thank you so much for answering my questions - and for writing the book in the first place!

"Miss Amy Dashwood is a daughter of the King of Kings, a homeschooled seventeen-year-old and a lover of books, period dramas, chocolate, long bike rides, babies, teacups, historical costumes and fiddle music.  Only a Novel, her first full-length work of fiction, chronicles a year in the life of Elizabeth Markette, a young woman with a head full of books who takes on a job as a governess after the death of her grandmother.  Only a Novel is available for purchase on Amazon, and you can find Amy at either of her two blogs, Yet Another Period Drama Blog and The Quest for Stories."
written by Maria at 7:59 PM 3 comments:

How delightful! {My Fair Lady with Anthony Andrews}

First of all, Anthony Andrews in My Fair Lady is amazing, splendiferous, delightful, wonderful, et cetera, et cetera, et cetera (and I'm writing this in the intermission between Act 1 and Act 2 - I love it!)  I knew AA could sing, because otherwise he wouldn't have been cast in a musical at all, but I don't think I actually realized it until he was in the middle of "Why can't the English?" and it suddenly struck me, "Hey!  Anthony Andrews can sing!  Anthony Andrews can sing!  ANTHONY ANDREWS can SING!" I won't go into much detail now, but since I agree with everything Amy and Eowyn said, you can just run over to their blogs.  And if you haven't listened to it now, what on earth are you waiting for?


But in case you aren't an Anthony Andrews fan, I implore you to watch The Scarlet Pimpernel 1982 immediately.

Oh, that was not what I meant to say.  Let's try again.  In case you aren't an Anthony Andrews fan, I implore you to realize that he's not the only reason this My Fair Lady is amazing.  Fully staged (I wish I could've been there to see it!), with a superb cast (yes, even without the... the individual... playing Henry Higgins), beautiful music, great lyrics, splendiferous storyline...

I might not be very articulate (even though I am a human with a soul and the gift of articulate speech!) but what am I to do? I got tea this morning instead of coffee!

Um, I didn't have any tea this morning. It was way too hot. It has been SO HOT for the last while.

But I've been thinking about this for quite a while and have a question for all of you.  That ending is so deliciously abrupt.  You don't get told half the amount you want to hear about the end.  Were Henry Higgins and Eliza in love?  Would they maybe get married?  Or would they be just sort of companionable friends?  I read somewhere that in Pygmalion (the play MFL is adapted from) George Bernard Shaw intended for Eliza to marry Freddy.

Marry Freddy!  What an infantile idea!

Ahem.  Being the hopeless romantic that I am, I like to think that they were actually in love, even though it's not directly said in the musical.  What do you think?

Oh, and in case you didn't know,


At the further end of the village, and tolerably disengaged from the rest of it, stood the parsonage, a new-built substantial stone house, with its semicircular sweep and green gates; and, as they drove up to the door, Henry, with the friends of his solitude, a large Newfoundland puppy and two or three terriers, was ready to receive and make much of them.

Ah, yes.  Henry Tilney AND a parsonage AND a Newfoundland puppy AND a few terriers!  Talk about amazing.  And if you would take less than two minutes to get a glimpse into Mr. Tilney's many delightfulnesses, watch this video.
Query: am I the only one who hears an imaginary voice of Miss Cornelia, alias Mrs. Marshall Elliot, whenever someone says 'believe me?'  So I am the only one?  Whatevah.