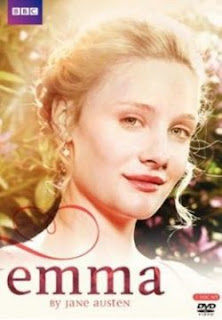 Summary: Emma Woodhouse, 'handsome, clever, and rich' is a young woman living in the village of Highbury. Her matchmaking efforts with the silly Harriet Smith cause heartache for Harriet and disagreement with the family friend George Knightley. Further complications arise when her former governess's stepson, handsome Frank Churchill, comes to Highbury. But when ...........um, I think I'll stop now to avoid spoilers, in case you haven't read or watched this before.

Pros/Cons (This means that I'm not really sure if it's a good thing or a bad thing ;D) 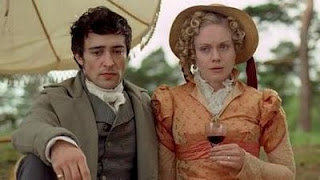 - Miss Bates has a more sympathetic portrayal, but she doesn't come across like a person 'predisposed to be happy,' but more like a woman facing poverty trying to be cheerful.
- Mr. Elton, although very annoying, looks like he has emotions and we can totally understand why Emma think's he's nice at the start.  Still, when I see him dragging that donkey with his silly wife on it, I can almost feel sorry for him.  Almost.
- Mrs. Elton is young and silly.  The annoyingness, vulgarity, and upstartism is just because she doesn't know any better.  When she's admiring that horrid toothpaste-coloured dress, I can almost think that she's just a little girl playing dress-up.  An interesting, and valid, portrayal, but not one I think is accurate.


Cons: (believe me, I had a hard time finding any!)
- Although this is my favorite Emma adaptation, the script seems to have a few weak parts; it just doesn't 'go through' as flawlessly as Emma 1996 and 1997.  A few of my favorite quotes were also omited.
- The one thing I really didn't like was Frank Churchill.  He's very charming, but instead of the at worst 'impudent dog' we have a rather Wickhamish character.

- I love Jane Fairfax, and Laura Pyper portrayed her character all right, but the looks were totally wrong.  Give me Olivia Williams any day. 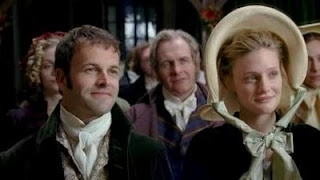 Pros: (This is my favorite part :D)
- Jonny Lee Miller's Mr. Knightley!!!  It couldn't have been it better if I had ordered it from a get-exactly-what-you-want catalogue.  The only thing that wasn't amazing, was that his "hmm"s, although most of the time very appropriate and characteristic, were a bit off in a few places, particularly the 'badly done, Emma' scene.  I really liked seeing him in Donwell, in his own library.  We really got to see what he was giving up when he went to Hartfield and it was so priceless when Emma rushed in and burst out that she loved him and she always would, but she couldn't marry him.  And when he sometimes raises his eyebrows; that was perfect for Mr. Knightley!  I think I should stop now, because I could continue raving for a long time.
- Romola Garai's Emma was amazing.  She didn't look pretty like Harriet, but she was very nice as a handsomeish girl with 'good health and bloom.'  I wouldn't say she is the absolute perfect Emma, because a few times I had the impression that she was acting instead of being Emma.  But her facial expressions..... I know some people don't like these, but I'd know exactly what she was thinking even if she didn't say a word.
- I also liked Harriet.  She was naive, pretty and very sweet.  Apart from her silliness, there was a certain womanliness about her.
- In this version we got a good insight into the real character of Mr. Woodhouse.  Not just a fussy old man, but a caring father, and a large reason for his not liking marriage is, as he tells Emma, "mothers die."  And, I guess, from his experience that's right.
- The costumes were very nice.  Many did not have the 'designed to look perfect' look of some of the other adaptation's costumes, but they looked like real clothes that a real Emma, Jane or Harriet might actually wear.  And orange looks so good on Romola Garai..........
- The soundtrack and scenery was beautiful.  I can't describe it, but it was amazing.

Overall Impression:﻿
I LOVE this movie.  The casting of all the characters except for Frank and Jane was perfect, it was very accurate to the book, and the length made us able to see some often ignored characters such as John and Isabella Knightley and we could see Emma and Mr. Knightley when they were younger.  I would give it five stars.

And now I shall leave you with some quotes.

Emma: Of course you are, so we must have cake!

Emma: A mile's walk and a daily scolding of Emma is just what Dr. Perry prescribes.

Mr. Elton about Emma's painting: What artistry!  (Whenever I read this I think, "What flattery!)

Harriet: This was sent to me this morning.  It is a proposal from Robert Martin - or at least I thought it was when I read it.

Mr. Knightley to Emma: It is better to be without wit than misapply it as you do.


Isabella: You know, I believe my father would worry.  I believe George is not well - he is listless and snappish.
Mr. Knightley: What?
Isabella: You are behaving strangely - not yourself.  You did not want to go to dinner with the Cavendishes, you did not wish to take the boys to find frogs in the park.
John Knightley: Some might say hesitation was a perfectly normal responce to both those invitations. 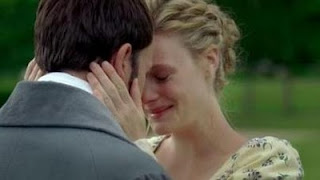 Did you see my blog post about miracles? if not please read it.

I do like this mini - series too. Emma's father is awesome to me, and the part with the cake was funny.

And Mr. Knightly is grand in this movie ;-).

Have a lovely week,
Grace

oh and can you please add my blog to the list of Wonderful Blogs? sorry if i sound selfish or something but i know you like my blog so...

I am sorry, but I simply cannot stand this Emma! Ramola Garai's Emma was terrible in my opinion, because she seemed not to get the character right It felt like a modern girl was thrown into the regency period. My other problem was what was going on with her eyes? I thought they were going to roll out of her head! I did like the costumes and Harriet was really the only character that I felt was true to the book, so I liked Harriet. The music was lovely. I just didn't like Emma herself. I was happy to read you review!
Elizabeth

I just finished re-reading Emma for the first time in years and I am so ready to watch a film adaptation! But I've never seen this one....I'm definitely going to give it a try!

@Naomi: Yes, I read your post. Thank you for reminding me to update my blog list! I might not do it right away, because I'm pretty busy, but when I do, you'll be on there.

@Grace: I agree; Mr. Woodhouse and his cake is so funny.

@Elizabeth: From my experience, people either love this Emma or hate it. It a pity you don't but as long as you like Gwyneth Paltrow I can forgive almost anything.

Oh dear! I can't believe I missed this post!! I LOVE this version. I have even less faults to find with it than you do; I actually don't think they did wrong with Frank; I don't mind him being represented more of a villain (although I'm not exactly sure that's what they were doing) because I dislike him so much. :P I also think it all flowed just as it should.
I quite agree about Jane Fairfax not being right though - my favorite is from the A&E version. :-) (Like you!)

I just loved the dance scene!!!!!! I felt quite disappointed (especially on first viewing) that they left out the "brother and sister? No, indeed" part, but the dance made up for it.
If they had got them both, however, it would have been spectacular!!!